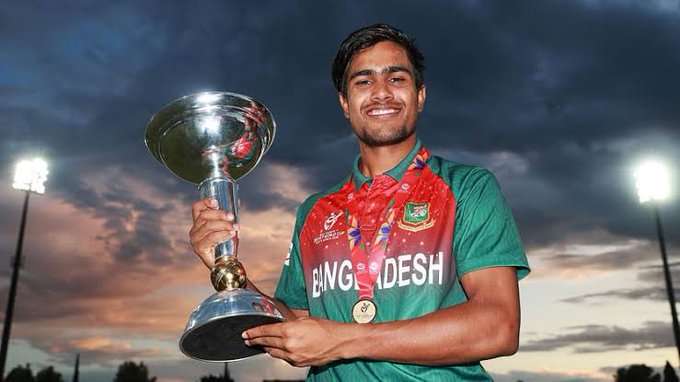 In the final of the ICC Under-19 World Cup on Sunday, Bangladesh achieved the distinction of becoming the first champion by defeating defending champions India by three wickets under Duckworth-Lewis rule. With this defeat, India’s dream of becoming world champion for the fifth time was shattered. Bangladesh won the toss and bowled first, bowling India out for 177 runs in 47.2 overs. Then with 23 balls remaining, They achieved the target by losing seven wickets under Lewis’s rule.

The performance of the Indian team in the final was very disappointing. Apart from Yashasvi Jaiswal (88 runs), Tilak Verma (38 runs) and Dhruv Jurele (22 runs), no Indian batsman could cross the double figures. The bowling of the Indian team was also very poor. The bowlers plundered 33 extra runs. For India, Ravi Bishnoi took the highest four wickets for 30 runs in 10 overs.

Chasing a target of 178 runs from India, Bangladesh got off to a good start by Pravej Hossain Emon (47) and Tanjid Hasan (17) sharing a 50-run stand for the first wicket. After this, Bangladesh lost their six wickets within the next 52 runs. After losing their six wickets for 102 runs, all hopes of Bangladesh now rested on Emon and captain Akbar Ali (43 not out). Bangladesh again held their own in the match with a 41-run partnership for the seventh wicket between Emon and Ali. However, Yashasvi Jaiswal also did wonders in bowling, dismissing Eamon and returning India to the match again. Eamon hit seven fours off 79 balls.

After Emon’s dismissal, all hope of Bangladesh rested on Captain Ali. After this, the rain came in the match and the game had to be stopped for some time but when the game started again, Bangladesh gave a revised target of seven runs off 30 balls and which they achieved with 23 balls remaining. Ali, along with Rakibul Hasan (9 not out), made his team win by three wickets and made him the champion for the first time. Ali hit four fours and six off 77 balls.

Wanted them to know what it is like when someone celebrates in front of you: Shoriful Islam on ‘dirty’ behaviour in U19 World Cup...