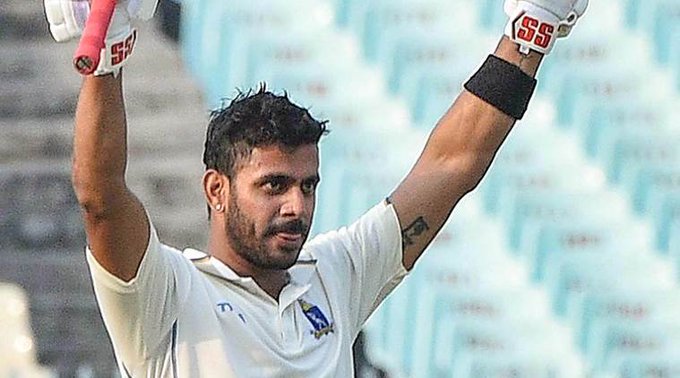 Whatever be the format of cricket, a triple century is always special. It becomes more important if a cricketer who is scoring a triple century trying to return to the national team. Manoj Tiwari of Bengal has done the same in Ranji Trophy. He scored 303 runs against Hyderabad on Monday at Bengal Cricket Academy ground. Manoj Tiwary made his last ODI match for India. In 2015, he played on the Zimbabwe tour.

Had hit 30 fours and 5 sixes in my innings of triple hundred yesterday. As of now I’m sharing a video of my best shot which I played in that innings ???? Later on I will share some more videos Till then enjoy this shot ???? ???? pic.twitter.com/p8zkQgDsIs

Thanks to this innings of Manoj Tiwari, Bengal (Bengal) declared their first innings for 635 runs at the loss of seven wickets. Manoj Tiwari played an unbeaten inning of 303 not out off 414 balls. He hit 30 fours and five sixes in his innings. Arnab Nandi returned unbeaten after scoring 65 runs with him. Apart from these two, Shreevats Goswami scored 95 and Anustup Majumdar scored 59 runs.

Bengal started the second day of Ranji Trophy (Ranji Trophy 2019-20) with 366 runs at the loss of five wickets. He declared the innings in the third session of the second day. In response, until the end of the day’s play, Hyderabad has lost five wickets for just 83 runs. Javed Ali on 19 runs and captain Tanmay Aggarwal are playing 10 runs. So far, Akshdeep has taken three wickets and Mukesh Kumar has taken two wickets for Bengal.

Manoj Tiwari answered the questions related to the return to Team India after the match.

This is the first triple century of 34-year-old Tiwari’s career.

Ranji Trophy 2019/20 Final, Saurashtra vs Bengal, As it happened: Saurashtra grab the glory

Ranji Trophy 2019/20 Semifinals Live Cricket Streaming, Gujarat vs Saurashtra, Bengal vs Karnataka: When and where to watch