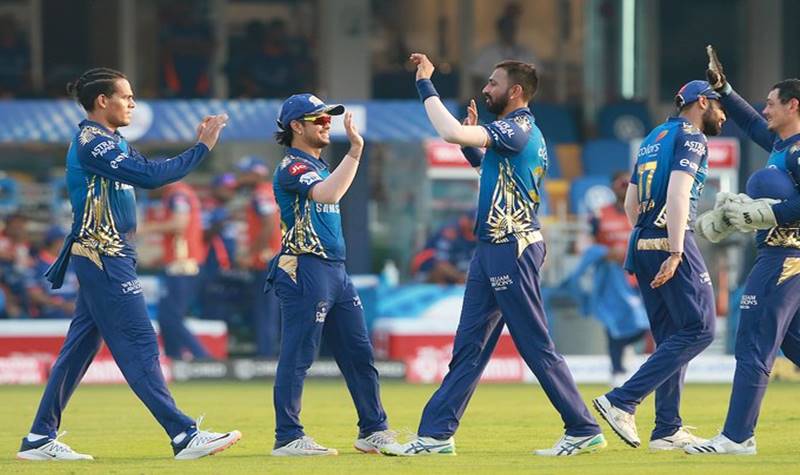 Mumbai Indians continued their winning form as they defeated Sunrisers Hyderabad with ease in the 17th match of IPL 2020 played at Sharjah Cricket Ground, Sharjah on Sunday.

Mumbai Indians captain Rohit Sharma won the toss and decided to bat first. It was not an ideal start for the defending champions as Rohit was dismissed by Sandeep Sharma. The umpire gave it not out and SRH captain decided to review the decision, it was overturned as there was edge on the bat.

Surya Kumar Yadav looked in fine touch right from word go putting pressure on Siddarth Kaul. On the other hand, de Kock took some time before hitting boundaries. Kaul was lucky as he got rid of dangerous Surya Kumar with a simple catch to Natarajan. At the end of six overs, Mumbai Indians made 48 for 2.

It was good bowling display by SRH bowlers who kept tight lines and lengths. De Kock looked in great touch smashing Samad. De Kock was dropped by Manish Pandey at the boundary. At the end of first timeout, Mumbai Indians 83 for 2. After a decent over by Kane Williamson, de Kock and Ishan Kishan smashed him for runs.

De Kock completed his fifty off just 32 balls. Rashid Khan got the breakthrough for SRH he took a good return catch to dismiss de Kock. De Kock and Kishan added 78 runs for the 3rd wicket. At the end of second timeout, Mumbai Indians made 134 for 3.

Ishan Kishan was looking good before Manish Pandey took a diving catch from the boundary. Hardik Pandya and Kieron Pollard smashed SRH bowlers with big hitting but Natarajan was superb with his yorkers. Siddarth Kaul bowled a brilliant yorker to dismiss Pandya. Pandya and Pollard added 41 runs for the 5th wicket. Krunal Pandya smashed a quickfire 20 off 4 balls to help Mumbai Indians post 208 for 5 in 20 overs.

Chasing 209 runs to win, Jonny Bairstow looked in great touch taking on Mumbai Indians bowlers right from word go. Trent Boult provided the breakthrough for MI dismissing Bairstow with a simple catch to Hardik Pandya. SRH openers put on 34 runs to lay a strong foundation. Manish Pandey came to the crease and took few balls to settle. At the end of six overs, SRH scored 56 for 1.

After the field restrictions, Pandey and Bairstow took the attack to MI bowlers. At the end of first timeout, SRH scored 86 for 1. James Pattinson provided much needed wicket for MI dismissing Manish Pandey with a simple catch to Pollard at long-off. Pandey and Warner added 60 runs for the 2nd wicket.

David Warner showed his class and took the attack to Krunal Pandya. During this course, Warner completed half-century off 34 balls. Trent Boult dismissed Kane Williamson with a slower delivery caught by de Kock to leave SRH in some trouble.

A superb catch by Ishan Kishan ended the innings for David Warner. Priyam Garg and Abishek Sharma failed to contribute anything. Abdul Samad hit lusty blows, but it was too big task for SRH. Mumbai Indians restricted SRH to 174 for 7 giving them a big 34 runs win.

For his spell of 2 for 28 in 4 overs, Trent Boult was named the man of the match award.

Rohit Sharma mature enough to do what’s best for him: Sourav...