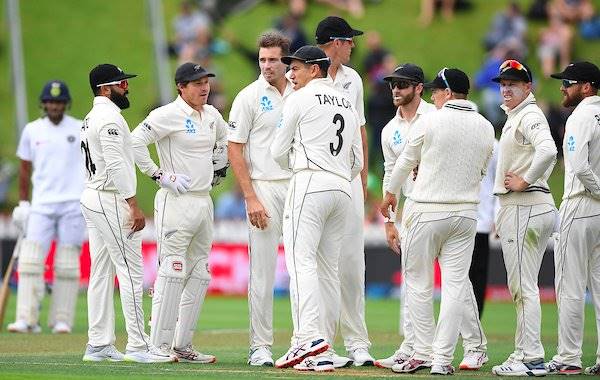 The Indian batting line-up faltered on the first day of the first Test against New Zealand after they were reduced to 122/5 before the rain came in as a saviour for the tourists.

New Zealand captain Kane Williamson who won the toss asked India to bat first. Williamson’s decision to take the ball came out to be a brilliant one for his side as the New Zealand seamers just rattled Indian batting.

Prithvi Shaw was the first one to go back in the hut for 16 while Cheteshwar Pujara and Virat Kohli followed him for 11 and 2 respectively.

Later, Hanuma Vihari and Mayank Agarwal was also undone to leave India in trouble. Ajinkya Rahane and Rishabh Pant are at the crease and will begin the proceedings on Saturday for India if rain doesn’t play the spoilsport in Wellington.

Kyle Jamieson scalped the priced wicket of Virat Kohli just for two runs after the Indian batsman once again miscued a drive to outside off stump delivery. Jamieson expressed his delight and said that the assistance from the pitch did help him remove Kohli early in his innings.

IND vs NZ: Kyle Jamieson becomes the man of the match...