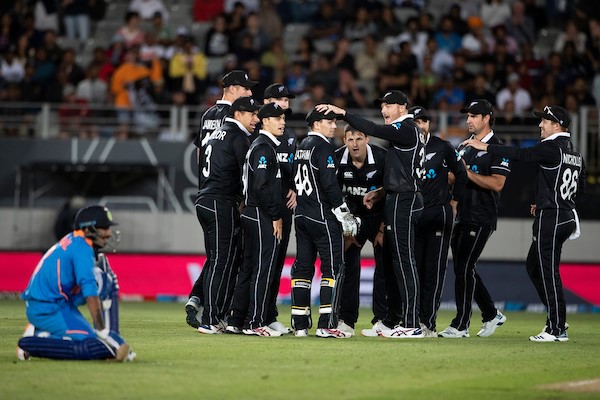 New Zealand, who was the victim of whitewash in T20 series, has made an ODI series against India by reversing to their name. The hosts defeated the Indian team by 22 runs in the second ODI match played on Saturday. With this, they have taken an unassailable 2-0 lead in the three-match series. New Zealand defeated India by four wickets in the first ODI. Now the third ODI match will be played between the two teams on Tuesday.

The second ODI was played in Auckland on Saturday between India and New Zealand. New Zealand batting first after losing the toss. They scored 273 for 8 wickets thanks to the brilliant innings of Martin Guptill (79) and Ross Taylor (73 *). In response, the Indian team could only score 251 runs in 48.3 overs.

Hat-trick of defeats in ODIs
This is New Zealand’s third consecutive win over India in ODI cricket. They defeated India in the semi-finals of last year’s World Cup. After this, they have won two consecutive matches in the current ODI series. In this way, the Kiwi team has made a hat-trick of victory over India.

Both teams descended with 2-2 changes
Both India and New Zealand teams went into this match with two changes. India replaced Navdeep Saini and Yuzvendra Chahal in the playing eleven in place of Mohammad Shami and Kuldeep Yadav respectively. New Zealand gave an opportunity to Mark Chapman and Kyle Jamieson to replace their two spinners Mitchell Santner and Ish Sodhi.

Guptill scored the most runs
New Zealand started the match well, batting first. Opener Martin Guptill (79) and Henry Nicholls (41) shared a 89-run partnership for the first wicket to give their team a strong base. However, Indian spinners bowled well in the middle overs and brought New Zealand under pressure.

Ross Taylor took over the Kiwis
The hosts had lost 8 wickets for 197 runs till the 42nd over. But Ross Taylor (73 *) persisted. He shared an unbeaten 76-run partnership with Kyle Jamieson (25) for the ninth wicket to take his team to a score of 273. For India, Yuzvendra Chahal took three wickets and Shardul Thakur took two wickets. Ravindra Jadeja got one wicket.

Surrender of Indian batsmen
The 274-run target at Auckland was not considered big, but India could not win the match due to the poor performance of the batsmen. Among India’s specialist batsmen, only Shreyas Iyer (52) could score more than 25 runs. He was also dismissed after playing a very bad shot. Prithvi Shaw 24, Virat Kohli 15, Kedar Jadhav 9, KL Rahul 4 and Mayank Agarwal 3 runs out.