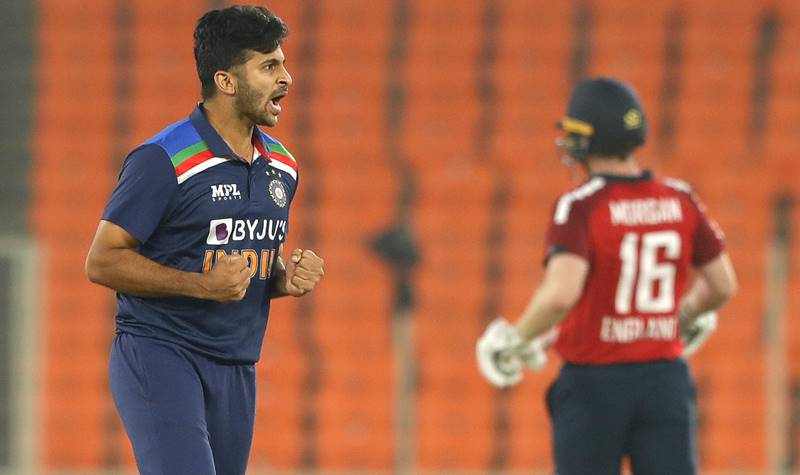 India level the series after winning the fourth game by 8 runs against England in Ahmedabad.

Virat Kohli | Winning captain: Proper game against a top side in this format. The wicket was better than any other game and the dew factor was massive, bigger than any other game as well. The wicket allowed us to get to that total. There were a few instances in the middle which were strange, but having said that 180+ was what we were looking at. Special mention to Surya, he batted outstandingly well in his first game. Similar to Ishan. They are quite fearless having played in the IPL. We don’t have any T20Is after this so I want the guys to be confident and come out of it very strongly. With the ball we were quite clinical. Shardul turned it around but our powerplay start kept England in check and under pressure.

Eoin Morgan | Losing skipper: It’s definitely been the closest game so far and India played much better and thoroughly deserve the win. There was a lot more dew throughout the game and the game ebbed and flowed a lot. The swing and momentum of the game went back to India and the the last over made it interesting. We are just trying to learn as much as we can in this series. The progression to the World Cup in seven months is important. We were very happy at the half way stage knowing that dew was around. The ball didn’t turn much and we were in control. In overs 16 and 17 we lost three wickets in eight balls and that set us back. It just leaves too much for the bowlers against a top quality side. Bairstow and Stokes got themselves in. Starting fresh isn’t easy, but they managed to negate that. Their experience took over and they took their options. Frustrating though then in the end to not get through despite the experience we have. We really want to play in must win games like these. Certainly all to play for now. Playing away from home and winning will be great.

Shardul Thakur: There was a lot of dew in this match, which wasn’t true of the last three matches. They were swinging hard in the last over, and it was important to bowl a couple of dot balls and then the game was sealed. The dry ball worked for them, and when I tried a slow bouncer it was in the slot and it went for six. If we bowled the slow ones on the stumps it would’ve been easy to hit, so the target was to keep it away from their power zone. If the ball is drier, it’s easier to grip for the knuckle ball. I am enjoying myself, and bowling in times when batsmen are going hard at us. Hardik had some plans but Rohit just wanted me to back my instinct. He mentioned one side of the ground is shorter and just asked me to keep it in mind and asked me to apply myself.

🇮🇳 2️⃣ – 2️⃣ 🏴󠁧󠁢󠁥󠁮󠁧󠁿 #TeamIndia fights back to level the series with an eight-run win in the 4th T20I 👏🏻@hardikpandya7 turned out to be the MVP with the ball (4-0-16-2) 🤩#OneFamily #MumbaiIndians #INDvENG @ImRo45 @BCCI pic.twitter.com/Bmh8V3rnpm

Lord Shardul is winning this one for sure. But for which team is a mystery. Beauty of Don! 😭🙏 #INDvENG

And England loses 2 wickets in the over. Massive over from Shardul. 💪🏻#OneFamily #MumbaiIndians #INDvENG https://t.co/sY2T76hluw

India wins in an absolute thriller! Came down to the wire! The team chasing doesn’t win this match! Now we’ll go to a decider in two days! What a match this was! It had everything. So damn good! 🇮🇳🏴󠁧󠁢󠁥󠁮󠁧󠁿#INDvENG

Rohit takes over the captaincy from @imVkohli and next ball this happened #INDvENG pic.twitter.com/zzaCooeklg

Fearless. Innovative. Aggressive. Thoroughly enjoyed @surya_14kumar first knock at the highest level. An innings of some serious quality. Hopefully first of many half centuries #IndvEng pic.twitter.com/2zVLQr5zWr

The Final Test between India and England abandoned

India beat England at Kennington Oval: Who said what on Twitter

What I can say is that we were advised this was...

If India can reproduce recent form, it’ll be enough in England:...

Chris Woakes called up for fourth Test against India