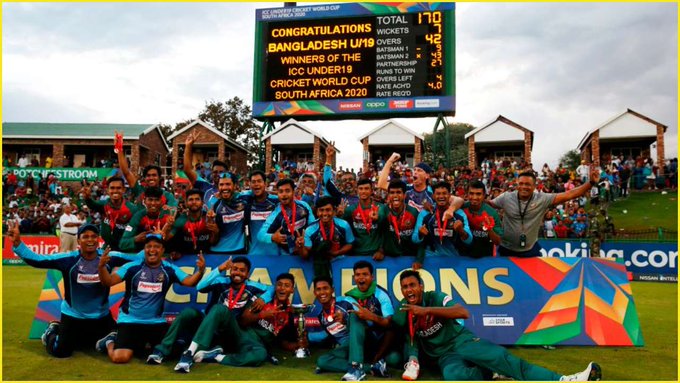 Indian cricket team lost in the final match of ICC U19 World Cup 2020. Batting first, the Indian team gave Bangladesh a target of 178 runs, which the Bangladesh team defeated by three wickets under Duckworth Lewis rule.

The match was stopped due to rain in 41 overs, after which they got a target of 170 runs in 46 overs. By then the team had scored 163 runs. Then after the start of the game with seven balls, the team scored this necessary seven runs. And declared Bangladesh victorious by three wickets.

In this match, India gave 33 extra runs which cost them. Not getting wickets in the initial over was also very damaging for India. Also, the failure of the Indian batsmen also overshadowed the Indian.

The highest run-scorer for Bangladesh was scored by 47 runs by Pervez Hussain. He was voted man of the match. At the same time, Akbar Ali also played a brilliant 43 runs at the end. Ravi Bishnoi was the most successful bowler from India. He took four wickets for 10 runs in 10 overs. At one time, Bangladesh were 5 wickets for 85 runs. After that Bangladesh returned but after falling seven wickets for 143 runs, the Indian team returned but by then it was late and rain also could not help Team India.

Bangladesh team had a good start. Parvez Hossain Emon and Tanzid Hasan collected 50 runs for their team before 9 overs. At the same time, Indian pacers were seen wandering. In the 9th over, Ravi Bishnoi gave India the first success with the wicket of the Tanzid. After this, Bishnoi bowled Mahmudul Hasan Joy on the score of 62 in the 13th over, along with Pervez Hossain Emon also returned to the pavilion due to injury.

Ravi Bishnoi’s four wickets
After this, Vishnoi dropped the second wicket for 62 runs in the 13th over. It is here that Parvez Hossain also returned to the pavilion due to injury. Vishnoi then took Towhid Hridoy in the very next over by taking out the third wicket on zero. Two overs later, Sushant dismissed Shamim Hossain and dropped Bangladesh’s fifth wicket on 85. At the same time, Bangladesh’s sixth wicket fell as Abhishek Das after completing 100 runs. He was caught by Sushant Mishra from Tyagi.

After falling the sixth wicket, Pervez Hossain Emon came back to bat on the field, who retired and returned to the pavilion. From here a partnership was seen. But the Indian team remained in the match even then. At the score of 143 in the 32nd over, Emon was dismissed by Yashasvi Jaiswal and brought India into the match.

Earlier, despite the struggling innings of opener Yashasvi Jaiswal (88), India could score 177 runs only. The Indian team started off to bat first after losing the toss and the team lost the wicket of Divyansh Saxena (2) within nine runs. After this Jaiswal and Tilak Verma (38) tried to get India out of the crisis by sharing 94 runs for the second wicket.

However, Tilak was also out then. Tilak hit three fours off 65 balls. After this, the Indian team went on losing wickets at regular intervals. Jaiswal, however, held one end. As long as Jaiswal, it seemed that the Indian team would reach around 225 on the wicket.

But Jaiswal too was dismissed as the fourth wicket on the team score of 156. Jaiswal hit eight fours and six off 121 balls. After his dismissal, the team could not do anything special and reached only 177 runs.