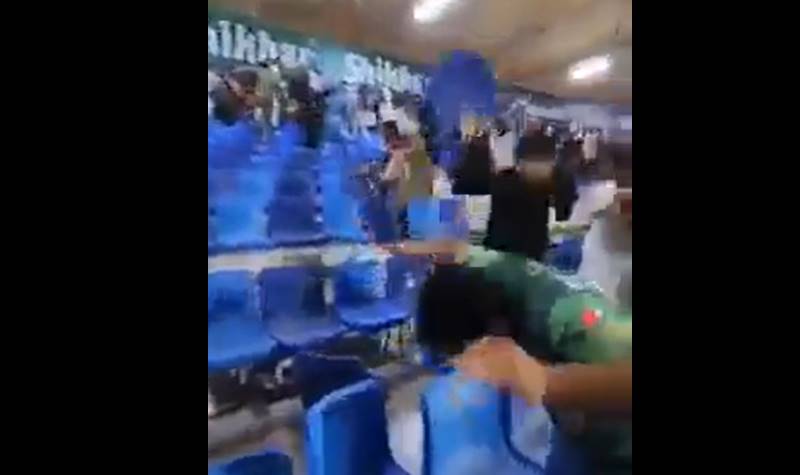 Afghanistan supporters are throwing chairs on Pakistani fans, these people are disgusting. pic.twitter.com/NW5oBZbpr6

Pakistan defeated Afghanistan by one wicket to enter the final. In the match played at the Sharjah Cricket Stadium on Wednesday, Pakistan achieved the target of 130 runs for the loss of nine wickets on the second ball of the 20th over.

Pakistan won the toss and decided to bowl first, which proved to be correct and Afghanistan could only score 129 runs for the loss of six wickets in 20 overs. İbrahim Zadran scored the most 35 runs, while Pakistan’s Haris Rauf dismissed two players.

Chasing 130 runs, Babar Azam and Mohammad Rizwan opened the innings, but the failure of the Pakistani captain in the tournament continued and he was lbw on the second ball of the first over. Fakhr Zaman also did not perform well and was run out after scoring five runs. Mohammad Rizwan, who scored two consecutive half-centuries in the tournament, became a victim of Rashid Khan, he scored 20 runs and went lbw.

After the initial wicket fell, Iftikhar Ahmed and Shadab Khan had a partnership of 42 runs, after which Iftikhar was dismissed for 30 runs off 33 balls. Babar Azam’s decision to send Shadab Khan to bat first proved to be correct and he scored 36 runs with the help of three sixes and one four. Rashid Khan outed them. Mohammad Nawaz, who played an important role in the victory against India, returned to the pavilion early today. In the same over, Fazlul Haq also bowled Khushdil Shah for one run.

On the second ball of the 19th over, Farid Ahmad bowled Haris Ruff. In this case, Fareed also sent Asif Ali to the pavilion. In the 20th over, Pakistan needed 11 runs to win and only one wicket was left, but Naseem Shah hit Fazlul Haq Farooqui with two consecutive sixes to take his team to the final.

Before that, Rahimullah Gurbaz and Hazratullah Jajai started the innings aggressively. Gurbaz hit Mohammad Hasnain with two consecutive sixes, but in the next over Haris Raouf bowled him. Naseem Shah of Hazratullah Jajai dropped the catch, but despite getting a chance, he could not stay on the wicket for long and scored 21 runs to Mohammad Hasnain. On the first ball of the next over, Naseem Shah bowled Mohammad Nabi at zero.

Sri Lanka clinch Asia Cup 2022 with victory against Pakistan: Who said what on Twitter

Anushka stood by me through these tough times: Virat Kohli after 71st international hundred

Pakistan steal win in last over against Afghanistan; India eliminated from...